The English word Abba comes from the Hebrew word ’ab, meaning “Father.” It was taken into the Greek New Testament in a few places. A child would often use this word for his or her father, so the Message Bible replaces it with the English word, “Papa.” In the garden of Gethsemane, Jesus (Yeshua‘) prayed to His heavenly Father and called Him by this title. 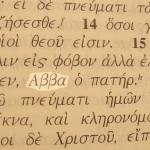 Romans 8:15 in the Greek in which Paul referred to God as Abba, Father.