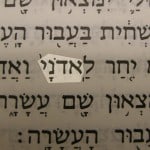 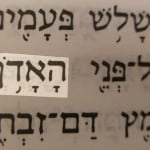 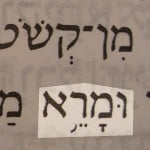 The king answered Daniel and said, “Surely your God is a God of gods and a Lord of kings and a revealer of mysteries, since you have been able to reveal this mystery.” (Daniel 2:47)

The Aramaic word mare’ forms part of some compound names of the Lord as it does in this verse. 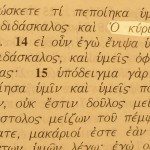 In the Greek Old Testament Adonai, Adon, and Mare were usually translated as kyrios, sixty times the translators chose despotēs, which emphasizes God’s omnipotence. In the New Testament kyrios is the most common word for Lord (it can also mean “Sir” or “Master”). 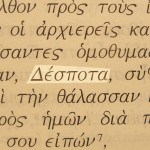 Lord (or Sovereign Lord) in the Greek text of Acts 4:24

“Now Lord, You are releasing Your bond-servant to depart in peace,
According to Your word;
For my eyes have seen Your salvation,
Which You have prepared in the presence of all peoples,
A *Light of revelation to the Gentiles,
And the glory of Your people Israel.” (Luke 2:29-32)

Simeon’s words when he saw the baby Jesus (Yeshua‘) are typical of the three verses. They all address God the Father as Lord. One Bible version calls Him Sovereign Lord in these verses (NIV). The word despotēs has the connotation of ownership.

Lordship has become soft and elastic in the warmth and comfort of many of our churches. Yet when we truly make Jesus Lord over our lives, it results in great blessings. But as lordship becomes flexible and flimsy, the blessings vanish. True lordship is clear and solid. Perhaps you’ve heard the saying, “Jesus is either Lord of all, or He’s not Lord at all.” So what does the lordship of Jesus mean?

At a painting job I once managed, a worker took the initiative to touch up the wall paint around several doorframes. I value initiative, but after the paint had dried, every doorway had a shiny strip around it. The color was a perfect match but the painter had used paint of the wrong sheen. The mistake happened because he ignored one simple instruction: “Read the paint can!”

Jesus warned about possible misunderstandings of lordship—the kind that use polite language and bold initiative, but fail to pay attention to the master’s will.

Not everyone who says to Me, “Lord, Lord,” will enter the kingdom of heaven, but he who does the will of My Father who is in heaven will enter. Many will say to Me on that day, “Lord, Lord, did we not prophesy in Your name, and in Your name cast out demons, and in Your name perform many miracles?” And then I will declare to them, “I never knew you; depart from Me, you who practice lawlessness.” (Matt. 7:21-23)

Strong words! They probably don’t get highlighted in our Bibles very often! Jesus pointed to the essence of lordship: pay attention to the Father’s will and do what He says. The Bible tells us the will of God. Often He provides specific guidance for our individual lives, ministries, or churches. That additional guidance is always consistent with Scripture. Making Jesus Lord involves reading the Bible and, to whatever extent we are inexperienced, allowing others to train us to understand the meaning and application.

Many of us live in a culture that softens strong words:

Don’t think that God will reward us just because we put a nice shine on our lives and ministries, He wants to be the absolute Lord. Jesus said that instead of entering the kingdom, such people would be turned away.

Following Jesus is an all-or-nothing commitment. Thankfully, the Lord is just and loving. He understands our failings and is ready to forgive us. But let’s take Him seriously. Lordship might sound restrictive but following our Savior is true freedom.

This post appears on www.BibleMaturity.com as a devotional. Visit that site for a variety of topical devotionals.