In Old Testament Hebrew, the word ’aman means to confirm, establish, or support something. Later, it became more an expression of desire or hope and gave rise to the Greek word amen, which has been adopted into many languages around the world. When we say “Amen” to conclude our prayers, we are asking God to establish the part of His will that we have set our desires on.

Isaiah used a name for God that included that form of the little Hebrew word ’aman: God of truth (’Elohei ’amen, Isa. 65:16). In the same verse, the Message Bible uses another name, “God of truth and faithfulness.”

To say that Jesus (Yeshua‘) is the Amen means that He confirms and establishes the will of God. Paul said that all the promises of God are “Yes” and “Amen” in Jesus (2 Cor. 1:20 KJV). In other words, Jesus fulfilled God’s promises. 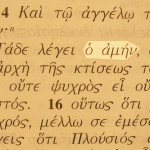 The Amen in the Greek text of Revelation 3:14

The Amen in Greek:

To the angel of the church of the Laodiceans write, “These things says the Amen, the Faithful and True Witness, the Beginning of the creation of God: . . .” (Revelation 3:14 NKJV)