Ancient of Days is an Aramaic name for God that is found in the book of Daniel. Like other names, it points out God’s eternal nature while describing Him in terms of a human elder. But He is no mere human; He has the throne of a king, receives the Son of Man, and passes judgment in favor of the saints.

In the book of Revelation, Jesus (Yeshua‘), the Son of Man, is Himself described in the same way as the Ancient of Days was in Daniel. 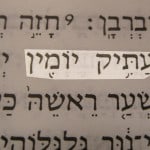 Ancient of days (Attiq yomin) in the Aramaic of Daniel 7:9

Ancient of Days in Aramaic:

I kept looking in the night visions,
And behold, with the clouds of heaven
One like a Son of Man was coming,
And He came up to the Ancient of Days
And was presented before Him. (Daniel 7:13)