The Hebrew word meaning “His Anointed,” is very closely related to the word for Messiah, which means, “Anointed One.” In Greek, the equivalent word is “Christos”, which corresponds to the English, “Christ.”

Anointing involved the ceremonial application of oil to bestow office on a person. It was done to prophets (1 Kings 19:16; Isa. 61:1), priests (Ex. 28:41; 29:7) and kings (1 Sam. 16:12-13) and connects this name to those three roles of Christ. When Jesus (Yeshua‘) quoted from Psalm 2 at His trial, He was claiming the role of Messiah. New Testament  writers accepted this psalm as a messianic prophecy. 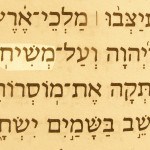 His Anointed in the Hebrew text of Psalm 2:2.

His Anointed in Hebrew:

Why do the heathen rage, and the people imagine a vain thing?
The kings of the earth set themselves, and the rulers take counsel together, against the Lord, and against his anointed. (Psalm 2:1-2 KJV)