You might be surprised to find the name Beelzebul in the list of names of Jesus (Yeshua‘). No record exists of Jesus actually being called Beelzebul by his enemies, but one comment of His suggests that they had done so. Jesus predicted that the same slander would be spoken against His followers.

In Old Testament times, worship of the rival Canaanite god Ba‘al was common. Various cities and regions had localized versions of Ba‘al. The Bible mentions Ba‘al zebub, the god of Ekron.1 That name literally means, “fly-lord,” but it might be a slur on the Canaanite title Ba‘al zebul (lord prince). When Pharisees accused Jesus of casting out demons “by Beelzebul the ruler of the demons,” Ba‘al zebub was probably in mind. In His answer, Jesus equated Beelzebul with Satan. There may also be a disparaging word association with zevel (manure). Academic considerations aside, I vote for the flies. With their appetites for decay and death, they represent Satan’s character best.2

To use the name Beelzebul of Jesus is nothing more than a blasphemous insult. It is entirely inappropriate for the One who came to destroy the works of the devil and all his demonic gods. 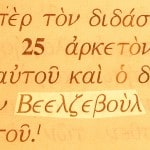 Beelzebul in the Greek text of Matthew 10:25.

It is enough for students to be like their teachers, and servants like their masters. If the head of the house has been called Beelzebul, how much more the members of his household! (Matthew 10:25 NIV)

Other insulting names of Jesus are Deceiver and Friend of tax collectors and sinners.