I am the bread of life

Bread of Life is one of the I am names of Jesus (Yeshua‘) that occurs in John’s gospel. When Jesus said I am the Bread of Life, He spoke of providing everlasting spiritual sustenance:

Jesus said to them, “I am the bread of life; he who comes to Me will not hunger, and he who believes in Me will never thirst. (John 6:35)

This statement of Jesus includes the messianic name, “Bread of Life.” The Jews expected the Messiah to feed people as Moses had done. The rabbis taught that the Messiah would repeat many of Moses’ acts. One tradition held that Jeremiah had hidden the pot of manna from the ark and that the Messiah would produce it to feed people. Jesus was making another Messianic claim. Since He said that God, not Moses, gave the bread, Jesus was also saying that He was God.

The Jews believed that manna was the food of angels (Ps. 78:24-25) and that it varied in taste according to need. Jesus, the living bread, meets every person’s specific need.

Another name of Jesus occurs in the same chapter of John’s gospel, the Living Bread (John 6:51). Jesus introduced this name as He began to teach about the Lord’s supper. Jesus said that a true relationship with Him included eating His body and drinking His blood. It offended some of His followers. When we take the bread and wine of communion in faith, we are participating in what Jesus taught about.

I am the living bread that came down out of heaven; if anyone eats of this bread, he will live forever; and the bread also which I will give for the life of the world is My flesh. (John 6:51) 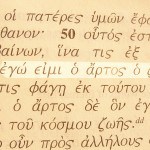 New Testament Greek Words for I am the Bread of Life