The title “star” (referring to a star or planet in the night sky) was a messianic term during inter-testamental times. It probably drew significance from the prophecy in Numbers 24, which said that a star would come from Jacob and a scepter from Israel. In 132 AD, when Simon ben Kosiba led a rebellion against the Romans, Rabbi Akiba gave the name Bar-Kokhba, “Son of the star” to him because he believed he was the Messiah (Christ).

Of course, Christians recognized Jesus (Yeshua‘) as the true Messiah a century earlier. The New Testament contains two names of Jesus that include the title “star”: Bright Morning Star and Morning Star. Although they sound very similar in English, the Greek words are completely different. 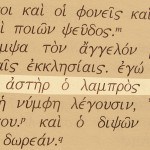 Bright morning star in the Greek text of Revelation 22:16.

I, Jesus, have sent My angel to testify to you these things for the churches. I am the root and the descendant of David, the bright morning star. (Revelation 22:16)