Carpenter’s Son is a name used to distinguish Jesus from other men with similar names. The Hebrew name Yeshua‘ (Jesus) was common in Jesus’ time, so the Jews often added a distinguishing phrase. In this case it was a mention of His father, Joseph, by his occupation. Jesus had typical Jewish names as well as messianic names and names that signified His divine nature. So we read in the gospels of Jesus the Nazarene, son of Joseph, son of Mary, and Jesus the Galilean. One of Jesus’ own names was Jesus the Carpenter because he joined his father’s business.

The Greek word for carpenter, “tekton,” is more akin to the English word craftsman. It was used of people working with different materials including stonemasons. Since stone is very common in Israel, it is likely that Jesus and Joseph were more like general building contractors or masons. 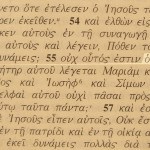