There was a man in Jerusalem whose name was Simeon; and this man was righteous and devout, looking for the consolation of Israel; and the Holy Spirit was upon him. 26 And it had been revealed to him by the Holy Spirit that he would not see death before he had seen the Lord’s Christ. 27 And he came in the Spirit into the temple; and when the parents brought in the child Jesus, to carry out for Him the custom of the Law, 28 then he took Him into his arms, and blessed God, and said,

29 “Now Lord, You are releasing Your bond-servant to depart in peace,
According to Your word;
30 For my eyes have seen Your salvation,
31 Which You have prepared in the presence of all peoples,
32 A Light of revelation to the Gentiles,
And the glory of Your people Israel.” (Luke 2:25-32)

The Greek word in this name is paraklētos, the word used to describe the Holy Spirit. It literally means, “one called alongside,” and implies comfort and help. After years of foreign occupation and spiritual oppression, many people in the nation of Israel longed for God’s consolation, just as Simeon did. Some writers say that “consolation of Israel” is one of the names of Jesus (Yeshua‘) but Luke seems only to use it to say that Israel needed consoling. Simeon’s focus was on Yahweh’s Messiah (Christ) and Simeon used three other names for Jesus: Your salvation, Light of revelation, and glory of Your people Israel. Jesus came in glory bringing with Him light and salvation, and He consoled people everywhere. 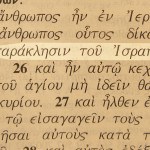 Consolation of Israel in the Greek text of Luke 2:25

Consolation of Israel in Greek:

The word paraklētos underlies several names for the Spirit of God, including Helper, Comforter, and Advocate.