Names of God including the words “creator” or “maker.”

Five names include the words “creator” or “maker.” For more information, click on the name.

Creator of heaven and earth

Maker of heaven and earth

Two Hebrew words are translated Creator. The word bore’ speaks of initiating something new and thus creating. Yotser comes from the word for fashioning or forming and is also the word used to call God the Potter. A third Hebrew word underlies several names of God that call Him the Maker.

“The word bara carries the thought of the initiation of the object involved. It always connotes what only God can do and frequently emphasizes the absolute newness of the object created. The word asa is much broader in scope, connoting primarily the shaping and fashioning of the object with little concern for special nuances.”1

Greek translations of the Old Testament used the word kitzo in place of bore’  especially in later books. 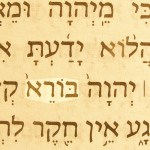 Do you not know? Have you not heard?
The Everlasting God, the Lord, the Creator of the ends of the earth
Does not become weary or tired.
His understanding is inscrutable. (Isaiah 40:28) 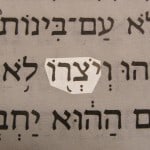 Their Creator (Yotsero) in the Hebrew text of Isaiah 27:11

Their Creator in Hebrew:

When its twigs are dry, they are broken off
and women come and make fires with them.
For this is a people without understanding;
so their Maker has no compassion on them,
and their Creator shows them no favor. (Isaiah 27:11 NIV) 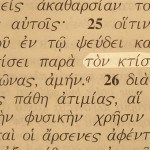 The Creator, a name of God in the Greek text of Romans 1:25.

The Creator in Greek:

They exchanged the truth about God for a lie, and worshiped and served created things rather than the Creator—who is forever praised. Amen. (Romans 1:25) 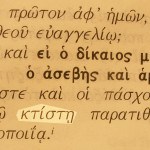 Let them that suffer according to the will of God commit the keeping of their souls to him in well doing, as unto a faithful Creator. (1 Peter 4:19 KJV)