Deceiver is one of a few names of Jesus (Yeshua‘) used by His enemies as insults. In this case, it was spoken after His death when the religious leaders suggested that the disciples might pretend that Jesus had risen from the dead. Jesus’ enemies accused Him of leading people astray earlier in His ministry (John 7:12, 47). In fact, Jesus did the opposite, He searched and found straying sheep (Matt. 18:12-13), He is the way, and the truth, and the life. 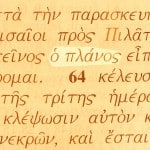 Jesus’ enemies called Him the Deceiver. The Greek word in the text of Matthew 27:63.

Now the next day, that followed the day of the preparation, the chief priests and Pharisees came together unto Pilate,
Saying, Sir, we remember that that deceiver said, while he was yet alive, After three days I will rise again. (Matthew 27:62-63 KJV)

Similar insulting names of Jesus are Beelzebub and friend of taxgatherers and sinners.