The word “God” in Hebrew:

There are three Hebrew words that are translated “God”: 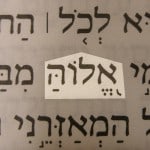 Bible references: Ps. 18:31 and about fifty times in total (with about forty of those in the book of Job).

’Eloah is likely to be the Hebrew word from which the other two are derived. Some scholars suggest the roots of the word have to do with fear. That might be a reflection of the attributes of God that cause people to be afraid of Him (Ps. 76:12; Isa. 8:13). Alternatively, God is the one to whom we can run for help when we are afraid. 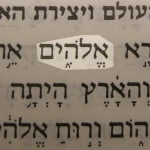 Elohim (God) in the Hebrew text of Genesis 1:1.

In the beginning God created the heaven and the earth. (Genesis 1:1, KJV)

’Elohim is the plural of ’Eloah. It places more emphasis on God’s strength, might, and power. It is used as a generic word meaning “god” and applies to pagan gods and goddesses. Although it is usually treated as a singular word, it sometimes occurs alongside plural verbs and adjectives. Notice the use of “Us” and “Our” in Genesis 1:26; 3:22; 11:7.

’Elohim is the generic name of God, used of the transcendent Creator who dwells outside and above the universe. ’Elohim is the sovereign God, the supernatural One. In contrast, Yahweh is the personal name of God. ’Elohim is often combined with adjectives in compound descriptive names for God.

’Elohim is also used of the “judges” who were supposed to represent God so well that they were even called ’Elohim.1 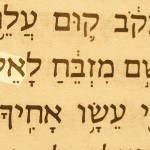 Then God said to Jacob, “Go up to Bethel and settle there, and build an altar there to God, who appeared to you when you were fleeing from your brother Esau.” (Genesis 35:1, NIV)

’El is often found as a name for God in Semitic languages. Again this word points to the power and might of God. Like the word ’Elohim, it occurs in compound names of God.

The plural ’elim is part of the name God of gods (’El ’elim). The possessive ’Eli means “my God.” Jesus (Yeshua‘) used that word on the cross (it is similar in Aramaic) when He called out “My God, My God, why have you forsaken me” (’Eli, ’Eli, lama sabachthani).2

The word God in Aramaic: 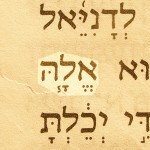 Thus the work on the house of God in Jerusalem came to a standstill until the second year of the reign of Darius king of Persia. (Ezra 4:24, NIV)

The word God in Greek: 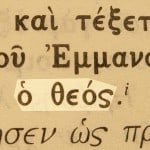 “The virgin will conceive and give birth to a son, and they will call him Immanuel” (which means “God with us”). (Matthew 1:23, NIV)

The translators of the Old Testament into Greek used the word Theos for God. That word is the one used as a generic name of God in the New Testament.