During the Jewish feast of first fruits, the people made offerings of grain to the Lord out of gratitude that the new harvest that had begun. They also called it the feast of weeks and the feast of harvest. It was a precursor of Pentecost, which happened fifty days after Passover. Jesus (Yeshua‘) was the first to rise from death. His resurrection foretold a much greater harvest of lives from the dead in the second resurrection at His return. 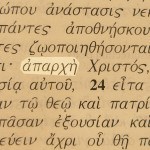 But now is Christ risen from the dead, and become the first fruits of them that slept. . . . But every man in his own order: Christ the first fruits; afterward they that are Christ’s at his coming. (1 Corinthians 15:20, 23 KJV)

In Hebrew, the word for first fruits is bikkurim. It is related to the word for a firstborn son, bekhor. The closest name of Jesus in meaning is Firstborn from the dead. Jesus is also called the Firstborn of all creation.