Firstborn of all creation

Firstborn of all creation is one of the New Testament Greek names of Jesus (Yeshua‘), but it has a Hebrew concept behind it. Psalm 89:27 uses the Hebrew word “firstborn” (bekhor) as a name of the Messiah (Christ) descended from King David. It has nothing to do with being the eldest child; David was the youngest son of Jesse. The Greek word prōtotokos is used in the Greek Old Testament in a similar way to bekhor. It certainly applied to the eldest child, who normally received the greatest privileges and inheritance according to custom. However, God sometimes shrugged off human customs and selected younger siblings to be part of His special work among His people  When He did that, the selected sons became “firstborn” in the sense that they were first in place and honor. It happened to Jacob (who is also called Israel and took the place of Esau) and to Ephraim (who replaced Manasseh).1

The Lord Jesus Christ is firstborn of all creation in the sense that He is pre-eminent among a new creation of children of God (Rom. 8:29; Col. 1:15). There is no suggestion in this name of Jesus that He was birthed or created by God. In fact, the Bible is clear that Jesus was one with God in creation. Another one of the names of Jesus states that truth: Jesus is the Beginning of the creation of God. 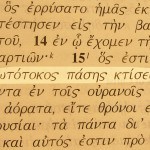 Firstborn of all creation in the Greek text of Colossians 1:15.

Firstborn of all creation in Greek:

A similar name of Jesus is firstborn from the dead.