In Hebrew culture, the firstborn son was pre-eminent and received a double inheritance. Sometimes the word bekhor is used of sons who were not literally “first birthed” but who became pre-eminent. That was the case with Jacob (Israel) and Ephraim.1 The blessing passed to them and not their older brothers (Esau and Manasseh respectively).

Jesus (Yeshua‘) is God’s firstborn in the same sense. Since God never birthed Him, but He existed forever with Him, and since He is God’s only son, the sense of “first birthed” cannot apply.

The book of Hebrews calls believers, “the church of the firstborn.” God took each of us from the bottom of life’s pecking order and gave us the honor and blessing of His first born children. In other settings, the first born were consecrated to God, and that is our calling. Jesus is firstborn of His vast royal family.

In a psalm that points to the Davidic messiah God says:

I will appoint him to be my firstborn,
the most exalted of the kings of the earth. (Psalm 89:27 NIV)

The Greek Old Testament translators used the word prōtotokos, the same word that is found in the New Testament. 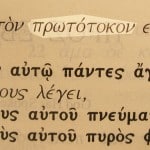 Firstborn in the Greek text of Heb. 1:6.

Those God foreknew he also predestined to be conformed to the image of his Son, that he might be the firstborn among many brothers and sisters. (Romans 8:29 NIV)

Similar names of Jesus are Firstborn from the dead and Firstborn of all creation. He is also the First fruits.