Glory of your people Israel

The descriptive name that Simeon gave to Jesus, the Glory of your people Israel, is one of a long line of names of God that speak of His glory. The glory that Israel had experienced as an occasional and rather frightening phenomenon became human in Jesus (Yeshua‘). The introduction to the Gospel of John includes an emphasis on God’s glory dwelling with us in Jesus. Simeon’s statement in the temple came in recognition of the messianic light of revelation being an embodiment of God’s glory. He came for His people, the Jews, but also for the Gentiles. 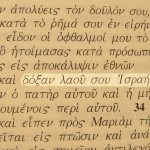 Glory of your people Israel in the Greek text of Luke 2:32.

Glory of your people Israel in Greek:

When the elder Simeon saw the baby Jesus in the temple, he described Him as:

A Light of revelation to the Gentiles,
And the glory of Your people Israel. (Luke 2:32)

In the Old Testament a similar name of God occurs: the Glory of Israel.