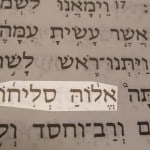 God of forgiveness in the Hebrew text of Nehemiah 9:17.

God of forgiveness in Hebrew:

They refused to listen,
And did not remember Your wondrous deeds which You had performed among them;
So they became stubborn and appointed a leader to return to their slavery in Egypt.
But You are a God of forgiveness,
Gracious and compassionate,
Slow to anger and abounding in lovingkindness;
And You did not forsake them. (Neh. 9:17)

In the NIV and The Message Bible this name is Forgiving God. This verse is one of several passages based on a formulaic description of God’s attributes first found in Ex. 34:6-7, although the Hebrew word there is nose’ and the English name is usually Forgiving God.