Some Bible versions have different translations of the name God of hosts: God Almighty (NIV) is perhaps the best known, though it suits the Hebrew name ’El shaddai better. The Hebrew word tsaba’, from which the second part of this name comes, often stands for armies, hence the name, “God-of-the-Angel-Armies,” in the Message Bible.

Another similar name is “LORD of hosts” (Yahweh tseva’ot or Jehovah tseva’ot) but some English Bibles translate that as “Lord Almighty” (NIV). The reason for the difference is that in some places in the Greek Old Testament, the word pantokratōr was used to translate the name “God of hosts.” Pantokratōr means “all-powerful.” “Almighty” is a good translation of pantokratōr. However, while the Hebrew word places the emphasis on the resources available to God, the Greek emphasizes His might. 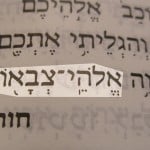 God of hosts (Elohei tsevaot) in the Hebrew text of Amos 5:27

God of hosts in Hebrew:

Therefore, I will make you go into exile beyond Damascus,” says the Lord, whose name is the God of hosts. (Amos 5:27)

God of hosts (Elohim tsevaot) in the Hebrew text of Psalm 80:7.

This is one of the seven names for God that the Old Testament specifically states to be a name of God.

In the book of Joshua, the mysterious “Captain of the Lord’s hosts” might be an early manifestation of Jesus Christ (Josh. 5:13-15).