The Aramaic word translated “Highest One” is related to the Hebrew word ‘Elyon, translated “Most High.” There is none to compare with God. 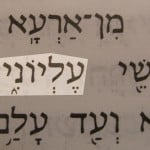 Highest One in the Aramaic text of Daniel 7:18.

Highest One in Aramaic:

The Ancient of Days came and judgment was passed in favor of the saints of the Highest One, and the time arrived when the saints took possession of the kingdom. (Daniel 7:13)

When Greek speaking Jews translated the Old Testament, they often used the word hypsistos. Luke chose the same word in verses that speak of God as the “Most High” in English Bibles (Luke 1: 32, 35, 76). In some New Testament translations, Jesus (Yeshua‘) is called the Son of the Highest instead of Son of the Most High, but the same word hypsistos underlies it.