Jesus (Yeshua‘) came as the Holy Servant of His Father on a mission to show the world what He is like and to reconcile the world to Him. This name indicates a fulfillment of the prophetic and messianic name, the “servant of the Lord.”

“Holy Servant” occurs in two verses in Acts. The Greek word pais can mean either, “child,” or “servant” depending on the context.  Evidence for it being “servant” in these passages is that the Hebrew word ‘eved (servant) in Greek translations of the Old Testament is translated pais as often as it is doulos.  Ben (son or child) is translated pais only once, while hyios (Greek for “son”) is used 4000 times. 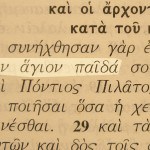 Holy Servant in the Greek text of Acts 4:27.

For truly in this city there were gathered together against Your holy servant Jesus, whom You anointed, both Herod and Pontius Pilate, along with the Gentiles and the peoples of Israel. (Acts 4:27)

The King James Version translates the word pais as child, so it calls Jesus “the Holy Child.”

Similar names for Jesus are Holy and righteous One and Holy One of God.