Image of the invisible God

Image of the invisible God is one of the descriptive names of Jesus (Yeshua‘) used by Paul. The Greek word eikōn has a broad range of applications. It can refer to idols that represent false gods but have no spiritual substance behind them. On the other hand, in Hebrews 10:1 it signifies something that is real and not a shadow (skia). In Greek society, eikōn could also refer to an identification document that acted as a legal description of the person. In that sense, Jesus (Yeshua‘) is the Image of the invisible God. Although, God is unseen (the simple meaning of aoratou), His work in the world and in the lives of His people is recognizable.

Paul expressed the belief that the visible world was designed by God to show off the invisible (Rom. 1:20). The book of Hebrews talks about the tabernacle of Moses being a shadow of the heavenly reality. In the same way, Jesus came to visibly represent the invisible God on earth (John 1:18; 14:9).

Of course, embedded in this name of Jesus is another possible candidate for a name of God, “invisible God.” The same Greek word is part of the descriptive phrase or name that ascribes honor and glory to the “King eternal, immortal, invisible” (1 Tim. 1:17). Romans 1:20 mentions God’s invisible attributes or nature and the word aoratos also forms part of a possible descriptive name of God, “Him who is unseen” (Heb.11:27). 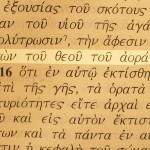 Image of the invisible God in the Greek text of Colossians 1:15

Image of the invisible God in Greek:

Paul used a similar name for Jesus in a letter to the Corinthians. He called Jesus the Image of God.