Jehovah nissi (Yahweh nissi) The LORD is my Banner

Jehovah nissi is how the King James Bible writes this name of God. The Hebrew is more likely to be pronounced Yahweh nissi. Moses gave the name to an altar after the Israelites had defeated the Amalakites in the wilderness. It is one of many descriptive names for God.

The root word, nes describes a pole supporting a shining ornament, or a standard or ensign. In that sense the name speaks of the allegiance between God and His people; He pledges to protect us and we pledge to follow His ways. It is a name that gives us great hope.

The word nes appears several times throughout the Old Testament. Often it points to Jesus (Yeshua‘). In Numbers 21 Moses made a bronze serpent, attached it to a pole, and set it up for the people to see. When plague-struck Israelites looked at the bronze serpent, they were healed. The New Testament ties that incident to Jesus, who was raised up on the cross so that everyone who looks to Him for salvation will receive it (John 3:14; Phil. 2:9).

Another passage speaks prophetically of Jesus:

Then in that day
The nations will resort to the root of Jesse,
Who will stand as a signal [nes] for the peoples;
And His resting place will be glorious.

Then it will happen on that day that the Lord
Will again recover the second time with His hand
The remnant of His people, who will remain . . .

And He will lift up a standard [nes] for the nations
And assemble the banished ones of Israel,
And will gather the dispersed of Judah
From the four corners of the earth. (Isaiah 11:10-12)

Hebrew Words for the LORD is my Banner 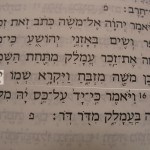 Jehovah nissi (or Yahweh nissi) The LORD is my banner in the Hebrew text of Exodus 17:15

This name was given by Moses to an altar after the Israelites defeated the Amalekites.

And Moses built an altar, and called the name of it Jehovah nissi. (Exodus 17:15, KJV)