Jehovah tsidkenu is a name that expresses the righteous character of God (“justice” is an English word that expresses the same thing). Some biblical names of God emphasize that attribute, for instance, Righteous God, Righteous Judge, and Righteous One. However, God does not keep righteousness to Himself; He makes it available to us through Jesus (Yeshua‘) so that the Bible appropriately calls Him, “*my righteous God” or “the LORD our righteousness.”

Jehovah tsidkenu, like many of the Hebrew names for God, can be written in different ways. Yahweh tsidqenu is a more likely option. The differences have to do with the way the languages of the Bible are written in English and the choice we make about how to pronounce YHWH, the letters of the personal name of God. 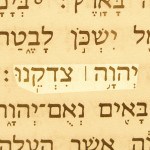 LORD our righteousness (Yahweh tsidqenu) in the Hebrew text of Jeremiah 23:6

LORD our righteousness in Hebrew:

“Behold, the days are coming,” declares the Lord,
“When I will raise up for David a righteous Branch;
And He will reign as king and act wisely
And do justice and righteousness in the land.
“In His days Judah will be saved,
And Israel will dwell securely;
And this is His name by which He will be called,
‘The Lord our righteousness.’” (Jeremiah 23:5-6)

Jeremiah prophesied of a Righteous Branch who would come and reign as king over a people who had been abused and scattered by false shepherd rulers (Jer. 23:1-6). Jesus came as that messianic shepherd-king. Jehovah tsidkenu, LORD our righteousness, points to Jesus. Jeremiah also gave the name to the city of Jerusalem as a prophetic statement that God, through His Righteous Branch, would rebuild her after her desolation by Nebuchadnezzar (Jer. 33:16).

Names that tell of the righteousness of God are also used of Jesus. So Jesus is called the “Righteous One.” In Isaiah, the Messiah-servant is called “my Righteous Servant” (Isa. 53:11). Malachi called Him the Sun of Righteousness (Mal. 4:2) and Zechariah said the coming messianic king would be righteous or just (Zech 9:9).

The Jewish Talmud considered Jehovah tsidkenu (Yahweh tsidqenu) to be a name of the Messiah (Christ).