The Hebrew name Yeshua‘ (Jesus) was common in Jesus’ time. In order to distinguish people who had common names the Jews added another phrase. Jewish names often included a mention of who the father was, what the person did for a living, or where they came from. Jesus had typical Jewish names as well as messianic names and names that signified His divine nature. So we read in the gospels of Jesus the Nazarene, son of Joseph, son of Mary, and Jesus the Galilean.

Because Jesus joined his father’s business and Joseph was a carpenter, one of Jesus’ names was “Jesus the Carpenter.” Jesus was also called the Carpenter’s son. 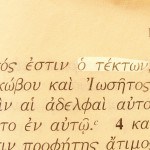 The Carpenter (tektōn) in the Greek text of Mark 6:3.

Is not this the carpenter, the son of Mary, the brother of James, and Joses, and of Judah, and Simon? and are not his sisters here with us? And they were offended at him. (Mark 6:3, KJV)

Was Jesus a carpenter?

The Greek word tektōn is certainly used as one of the names of the Lord Jesus Christ. But does tektōn really refer to a carpenter?

Tektōn is actually a word with a broader meaning. It is more like our word “craftsman” or “builder.” Israel is a land in which rocks outnumber trees and many buildings are made mostly of stone. It is possible that Jesus and Joseph were stonemasons. It would be more appropriate to call them building contractors.

While Jesus lived in Nazareth and Capernaum, the Romans were constructing the city of Sepphoris nearby. Could it be that they hired Jesus and Joseph to help with that construction project?