Names of God including the word “judge.”

Judge of all the earth

Judge of the living and the dead

The Hebrew word for a judge is broader than our English term. It encompasses all three aspects of modern government or rule – judicial, legislative, and corrective. As the Lawgiver, God establishes right and wrong; as God of recompense and God of vengeance, He punishes evil and rewards good; as God of justice, He knows exactly the right settlement for every situation. To say that God is judge incorporates all these functions.

In Israel, justice was understood to reside in leading men rather than in the laws. Correct judgment resides in God. 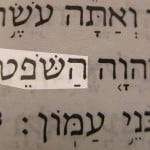 I have not sinned against thee, but thou doest me wrong to war against me: the Lord the Judge be judge this day between the children of Israel and the children of Ammon. (Judges 11:27 KJV) 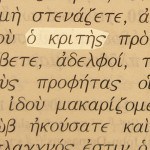 The Judge in the Greek text of James 5:9.

Don’t grumble against one another, brothers and sisters, or you will be judged. The Judge is standing at the door! (James. 5:9 NIV)

Similar names for God are Righteous judge, Judge of (all) the earth, Judge of Israel, God of justice, Our lawgiver, and, in the New Testament, Righteous Judge and Judge of the living and the dead.