King of Israel is one of several royal names of God. Although Israel had men as kings for several hundred years, God was the true ruler of the nation. Samuel the prophet expressed His concern to God that if Israel was given a human king she would turn away from her heavenly King. God permitted Israel to have a king but warned her how human kings behave. Centuries later, God sent Jesus (Yeshua‘) as a new kind of king. Jesus took the broken and distorted human office and redefined it according to the pattern of the kingdom of God. Jesus was more than a king of Israel, He is King of the world.

King of Israel (Melekh-Yisra’el) in the Hebrew text of Isaiah 44:6

King of Israel in Hebrew:

Thus saith the Lord the King of Israel, and his redeemer the Lord of hosts; “I am the first, and I am the last; and beside me there is no God.” (Isaiah 44:6 KJV) 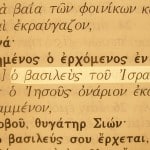 King of Israel in Greek:

On the next day the large crowd who had come to the feast, when they heard that Jesus was coming to Jerusalem, took the branches of the palm trees and went out to meet Him, and began to shout, “Hosanna! Blessed is He who comes in the name of the Lord, even the King of Israel.” (John 12:12-13)