King of the Jews

King of the Jews is a title that began to be used in the years prior to Jesus (Yeshua‘). The nation of Israel were more commonly known as the Jews by then. The title, King of the Jews, was a political title used by the Romans for hand-picked appointees to the office. None of them were legitimate rulers descended from King David.

When Jesus was born, the magi sensed that something special was happening. They inquired about a newborn “King of the Jews.” It scared King Herod—that was his title! He tried to eliminate his rival by butchering Bethlehem’s babies.

Similar political tension surfaced toward the end of Jesus’ life. The Jewish council presented Jesus to the Roman governor, Pontius Pilate, with the accusation that He claimed to be King of the Jews. Of all the possible charges, the Romans were most likely to listen to that one. Although Pilate tried to free Jesus, the priest’s plan worked and Jesus died with that title nailed to the cross as an indictment.

In a way, Jesus was the King of the Jews; the crowd that welcomed Him to Jerusalem certainly shouted it out. But He was much more. He was the messianic King of Israel, the King of the nations, King of kings, and the King of Heaven. 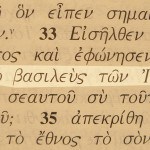 King of the Jews in Greek:

Where is he that is born King of the Jews? For we have seen his star in the east, and are come to worship him. (Matthew 2:2 KJV)

Similar names for God are King of glory, King of Israel, and its equivalent, King of Jacob.