Lord of lords (’Adonei ha’adonim) in the Hebrew text of Deuteronomy 10:17

Hebrew Words for Lord of lords:

For the Lord your God is God of gods, and Lord of lords, a great God, a mighty, and a terrible, which regardeth not persons, nor taketh reward. (Deuteronomy 10:17 KJV)

Greek Words for Lord of lords: 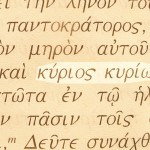 Lord of lords in the Greek text of Revelation 19:16.

[Ten kings] will wage war against the Lamb, but the Lamb will triumph over them because he is Lord of lords and King of kings—and with him will be his called, chosen and faithful followers. (Revelation 17:14 NIV)