Majesty in the heavens

Majesty in the heavens is one of several code names for God. The Jews used it as a reverent alternative to avoid pronouncing His real name. The Jews became very careful about the name of God because they did not want to misuse it or profane it. 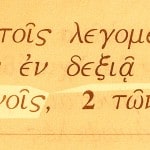 Majesty in the heavens, in the Greek text of Hebrews 8:1.

Majesty in the heavens in Greek:

Now the main point in what has been said is this: we have such a high priest, who has taken His seat at the right hand of the throne of the Majesty in the heavens. (Hebrews 8:1)

A similar substitute name for God is Majesty on high. He is also called the Majestic One, God the Lord.