There is nothing special about the Greek words meaning “man.” However, on occasion the New Testament writers used them pointedly to talk about Jesus (Yeshua‘) in a special way. In those instances, we can think of them as additional names of Jesus. Although the Greek words are gender specific, gender is not the emphasis. Jesus is a representative human. 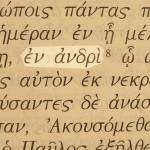 A Man in Greek:

[God] has fixed a day in which He will judge the world in righteousness through a Man whom He has appointed, having furnished proof to all men by raising Him from the dead. (Acts 17:31) 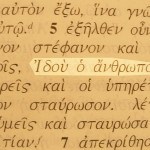 “Behold the Man” – Pilate’s words to the crowd before he handed Jesus to be crucified (John 19:5).

The Man in Greek:

Then came Jesus forth, wearing the crown of thorns, and the purple robe. And Pilate saith unto them, Behold the man! (John 19:5 KJV)

Similar names of Jesus occur. Pilate’s wife referred to Jesus as “that Righteous Man,” telling Pilate to have nothing to do with Him, and Paul spoke of Him as the “Second Man.”