Messiah the Prince is a more specific name of Jesus (Yeshua‘) because it shows that the Messiah is more than a ceremonial figure. He takes His followers toward an objective. The word nagid speaks of prominence and indicates various kinds of leader. 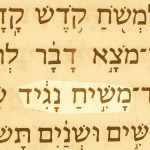 Messiah the Prince (Mashiakh nagid) in the Hebrew text of Dan. 9:25.

Messiah the Prince in Hebrew:

From the issuing of a decree to restore and rebuild Jerusalem until Messiah the Prince there will be seven weeks and sixty-two weeks; it will be built again, with plaza and moat, even in times of distress. Then after the sixty-two weeks the Messiah will be cut off and have nothing, and the people of the prince who is to come will destroy the city and the sanctuary. And its end will come with a flood; even to the end there will be war; desolations are determined. (Daniel 9:25-26)

Different Bible versions treat this Hebrew phrase in different ways: “The Anointed one, the ruler” (NIV), the “anointed leader” (Message Bible), and “the anointed one, a prince” (Amplified Bible). The second prince mentioned in the passage is an enemy leader.

In the next verse in Daniel, and twice in John’s gospel, Jesus is simply called the Messiah. In the New Testament Jesus is mostly called the Christ, which is a transliteration of the Greek equivalent word christos.