The Hebrew word mashiakh means “Anointed One” and is translated that way in some places. In Israel, priests and kings were anointed and sometimes prophets. God’s promised Messiah would also be anointed, hence the title. The Greek word christos is likewise an adjective meaning “anointed.” Only in two places does John use the Greek transliteration messias to speak of Jesus and then he explains it for his Greek readers. 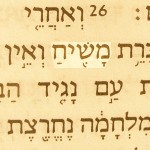 From the issuing of a decree to restore and rebuild Jerusalem until Messiah the Prince there will be seven weeks and sixty-two weeks; it will be built again, with plaza and moat, even in times of distress. Then after the sixty-two weeks the Messiah will be cut off and have nothing, and the people of the prince who is to come will destroy the city and the sanctuary. And its end will come with a flood; even to the end there will be war; desolations are determined. (Daniel 9:25-26)

Another form of the same Hebrew word is translated “His Anointed” in Psalm 2:2. That is appropriate because the word comes from the verb meaning, “to anoint.” Another similar name in the previous verse in Daniel is “Messiah the Prince.” 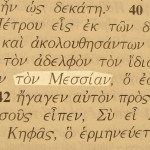 The first thing Andrew did was to find his brother Simon and tell him, “We have found the Messiah” (that is, the Christ). (John 1:41)

Some versions of the New Testament chose to translate the Greek word christos with the English “Messiah” rather than the transliteration that we are most used to, “Christ.” That is appropriate, but the Greek word messias only occurs in two verses in John’s gospel.