Paraklētos is a Greek word that literally means, “One called alongside.” It functions as a name of the Holy Spirit who comes alongside us in various ways. Sometimes He meets us as a helper, at other times as a friend. We often need His comfort and His advocacy. The various English translations reflect the work of the Holy Spirit. Some people call Him the Paraklete based on the Greek word.

Jesus (Yeshua‘) said that the Holy Spirit would be allos paraklētos, another of the same kind as Himself. The Holy Spirit reminds us of Jesus’ teachings and leads us into truth. 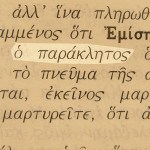 Parakletos (Helper, Comforter, Advocate, or Friend) in the Greek text of John 15:26.

But when the Comforter (Counselor, Helper, Advocate, Intercessor, Strengthener, Standby) comes, Whom I will send to you from the Father, the Spirit of Truth Who comes (proceeds) from the Father, He [Himself] will testify regarding Me. (John 15:26 Amp.)

In the NASB and KJV in 1 John 2:1, paraklētos is also translated Advocate. In Luke 2:25 it is part of the expression, “consolation of Israel,” which some people take as a name of Jesus. One name of God, God of all comfort, includes a form of the word paraklētos.