One of the Greek words (archēgos) in this name of Jesus (Yeshua‘) can be translated using several different English words that are variations on a theme. Prince of life is the name used by the NASB. The broad meaning of the word includes the idea of pioneering or founding something. Jesus blazed the trail to resurrection life and established a new quality of life for everyone who believes in Him. 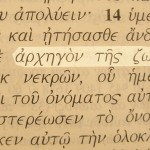 Author or Prince of life in the Greek text of Acts 3:15.

Prince of Life in Greek:

But you disowned the Holy and Righteous One and asked for a murderer to be granted to you, but put to death the Prince of life, the one whom God raised from the dead, a fact to which we are witnesses. (Acts 3:14-15)