A true prophet is sent by God, spoken to and through by God as His servant. Prophets belong to God. They bring commandments to men, testify against sin, and have insight into where events are leading.

In the Old Testament, the prophets were often anointed with oil. The word “messiah” (Christ in Greek) means “anointed one,” so the prophetic office was associated with the Messiah from early days. Moses’ words in Deut. 18:15-22, about a new prophets that God would one day raise up, were individualized in Deut. 34:10 and pointed to a line of prophets ending in Jesus (Yeshua‘).

Jesus came as the supreme messenger (Heb. 1:1).  He spoke the prophetic message, dramatized it and taught in parables as other prophets did.  He died a martyr’s death as they did.  Yet He was also the Word itself and the focal fulfillment of centuries of prophecy.

This is the Moses who said to the sons of Israel, “God will raise up for you a prophet like me from your brethren.” (Acts 7:37)

Jesus seemed comfortable with the title. He taught like the prophets, and did miracles that surpassed those of the greatest prophets. He also convicted people of sin, though in the most caring and gentle way. People often referred to Him as a prophet. Once, the crowd acknowledged that He was no ordinary prophet, He was the Great Prophet. 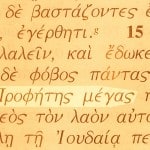 When Jesus raised the son of the widow in Nain, the multitude were amazed:

They were all filled with awe and praised God. “A great prophet has appeared among us,” they said. “God has come to help his people.” (Luke 7:16 NIV)