Daniel experienced God as a revealer of mysteries. The gift of wisdom that Daniel exercised depended entirely on his relationship with God. Daniel remained faithful to God in worship, prayer, and obedience to God’s law (notably dietary law). As a result, God was able to reveal mysteries to him. The revelations were so astounding that even the pagan king, Nebuchadnezzar recognized the power of God behind them. Nebuchadnezzar coined this name of God. 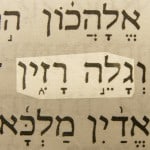 Revealer of mysteries (Galeh razin) in the Aramaic text of Daniel 2:47.

Revealer of mysteries in Aramaic:

[Nebuchadnezzar] the king answered Daniel and said, “Surely your God is a God of gods and a Lord of kings and a revealer of mysteries, since you have been able to reveal this mystery.” (Daniel 2: 47, see also verse 28)

That God can reveal mysteries is not surprising since He is also the God of knowledge and the One perfect in knowledge.

I rarely lose things, except my memory. When I forget a person’s name or misplace my keys, I am grateful for the times when God answers my prayers and reminds me of a name or shows me the lost object. God longs to show us greater things. Like Daniel, we are in relationship with the revealer of mysteries and He wants to involve us in revealing those mysteries to others.

Daniel faced a nightmare situation. King Nebuchadnezzar had lost a night’s sleep. A bad dream had left him anxious and confused. Unless someone interpreted the dream, the king would tear every advisor in Babylon limb from limb. To make matters worse, the king refused to tell anyone what the dream was. The wise men were stumped; only their gods could know, and they didn’t live nearby (Dan. 2:11).

Quickly, Daniel told his three friends and they did classic intercession. They were among the wise men of Babylon who would be destroyed by the frustrated king. However, because of their relationship with the God of heaven, they could petition Him on behalf of the whole group (Dan. 2:17-18). Like them, our privileged access to the Lord is meant to benefit everyone, even people cut off from God.

The truly wise are humble and give glory to God (Dan. 2:27, 30). When God answered Daniel in a night vision, he immediately praised God for making the dream and its interpretation known. Daniel was granted an audience with Nebuchadnezzar. The king remarked on Daniel’s insight, but Daniel pointed to the God of heaven as the revealer of mysteries.

The king said to Daniel, whose name was Belteshazzar, “Are you able to make known to me the dream which I have seen and its interpretation?” Daniel answered before the king and said, “As for the mystery about which the king has inquired, neither wise men, conjurers, magicians nor diviners are able to declare it to the king. However, there is a God in heaven who reveals mysteries, and He has made known to King Nebuchadnezzar what will take place in the latter days. (Dan. 2:26-28)

Daniel proceeded to tell the dream and give its interpretation. It concerned a statue made of four materials: gold, silver, bronze, and a mixture of iron and clay. A stone struck the statue and crushed it. Then the stone grew into a mountain filling the earth. Nebuchadnezzar was duly impressed. He gave Daniel lavish presents and a promotion. The king also acknowledged God as the revealer of mysteries1.

This story sets the stage for understanding biblical mysteries and our part in them.

Ask God to show you the keys to the mysteries of His kingdom, and make it your life work to share them with others.

The goal of www.BibleMaturity.com is to promote spiritual growth and faith in God. Please share these short Bible devotions with your friends and family and pray for revival.