Righteous Branch is one of the many biblical names describing attributes of God. The word tsaddiq is rooted in the idea of conformity to an ethical or moral standard or norm, and in straightness. The other English word for it is ‘just’. The legal term, “justified,” meaning, “declared innocent,” and the typing terms, “right, left or center justified,” are helpful pictures of its meaning.

The universal standard of righteousness is God’s will and nature; the righteous man aligns with God in action and character. Of course, it is impossible to live up to God’s standards, but Jesus (Yeshua‘) imparts His righteousness to us through our faith in Him.

Righteous Branch is one of the names of Jesus. The Hebrew word tsemakh (branch), and the expressions “sprout” and “spring forth” were widely understood as messianic terms. The Greek Old Testament version of Jeremiah 23:5 uses the term anatolē dikaios.1 Anatolē is the same word found in another name for Jesus, the Sunrise from on high. Jesus came as the messianic branch that sprouted from the lineage of King David to establish the kingdom of God.

Ironically, when Jeremiah prophesied, Zedekiah (Tsidikayu) was king. He was far from righteous. Jesus alone could live as a righteous man on earth. 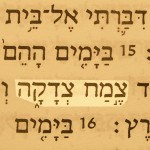 Righteous Branch (Tsemakh tsedaqah) in the Hebrew text of Jeremiah 33:15

“Behold, the days are coming,” declares the Lord
“When I will raise up for David a righteous Branch;
And He will reign as king and act wisely
And do justice and righteousness in the land.” (Jeremiah 23:5)

In those days and at that time I will cause a righteous Branch of David to spring forth; and He shall execute justice and righteousness on the earth. (Jeremiah 33:15)