Pontius Pilate’s wife had a dream about Jesus (Yeshua‘) on the night that He was arrested. Next morning she told her husband, “Have nothing to do with that righteous Man.” Perhaps it is not a true name of Jesus, but like other names it expresses a characteristic of Jesus. 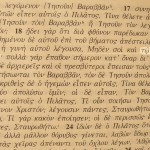 That Righteous Man, the words of Pilate’s wife in Greek in Matthew 27:19.

That Righteous Man in Greek:

While [Pilate] was sitting on the judgment seat, his wife sent him a message, saying, “Have nothing to do with that righteous Man; for last night I suffered greatly in a dream because of Him.” (Matthew 27:19)

The Greek word dikaios is an adjective used as a noun. It can be translated in different ways but all have the same basic meaning. The variety of translations among the English versions demonstrate the range of meaning. In the NIV, Jesus is the “innocent man,” in the KJV, He is the “just man,” in the Message Bible, He is the “noble man,” and in the Amplified Bible, He is the “upright man.”

Similar names of Jesus are Righteous One and Holy and Righteous One. He is also referred to as a Man and the Man.