“Righteous One” translates a single word in both Greek and Hebrew. One of the attributes of God is His righteousness. The same word can also be translated “just.” Justice and righteousness are closely linked biblical concepts. 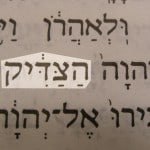 The Righteous One (Hatsaddiq) in the Hebrew text of Exodus 9:27.

The Righteous One in Hebrew:

From the ends of the earth we hear singing:
“Glory to the Righteous One.” (Isaiah 24:16 NIV)

Righteous One in Greek: 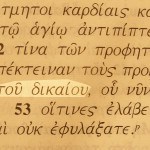 Part of Stephen’s speech to the Jewish leaders included the accusation that they had murdered Jesus (Yeshua‘), the Righteous One:

Which one of the prophets did your fathers not persecute? They killed those who had previously announced the coming of the Righteous One, whose betrayers and murderers you have now become. (Acts 7:52)

In other Bible versions Jesus is called the Just One (KJV, Msg) because the Greek word dikaios means both.