Rock of my salvation

“Rock of my salvation” includes the Hebrew word tsur. Tsur is the most common Hebrew word used in the names of God that describe Him as a rock. Tsur speaks of a rock that is massive, very safe, and virtually impenetrable like the cliff face of El Capitan (in California) or the fortress of Masada (in Israel). The word can even refer to a mountain. It describes God’s strength, endurance, and reliability.

Yeshu‘ah is the Hebrew word meaning “salvation.” In different forms it is part of many names for God that tell of His salvation. 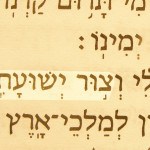 Rock of my salvation (Tsur yeshuati) in the Hebrew text of Psalm 89:26

Rock of my salvation in Hebrew:

My faithfulness and My lovingkindness will be with [My servant, David]
And in My name his horn will be exalted.
I shall also set his hand on the sea
And his right hand on the rivers.
He will cry to Me, “You are my Father,
My God, and the rock of my salvation.” (Psalm 89:24-26)

Rock of our salvation (Tsur yish‘enu) in the Hebrew text of Psalm 95:1

Many names for God include either the word “rock” or the word “salvation.” For instance, Horn of Salvation and Rock of my refuge.