Two names of Jesus (Yeshua‘) are similar: the Root of Jesse and the Root of David. The book of Revelation also calls Him the Root and descendant of David. Jesse was King David’s father. 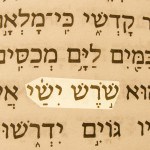 Root of Jesse (Shoresh Yishai) in the Hebrew text of Isaiah 11:10

Root of Jesse in Hebrew:

In that day there shall be a root of Jesse, which shall stand for an ensign of the people; to it shall the Gentiles seek: and his rest shall be glorious. (Isaiah 11:10 KJV)

The Hebrew word for ensign (signal in NASB) is from the same root word (nes) that is found in the name Jehovah nissi (Yahweh nissi or the Lord my banner). Root of Jesse is another name of Jesus, who had been prophesied about in many ways since the world began. At a glance, it is easy to miss the fact that a root of a plant supports the plant. Although Jesse was an ancestor of Jesus, the emphasis of this name seems to be that Jesus, one with the Eternal God, was the source of Jesse. Isaiah’s prophecy says that the Creator of Jesse would one day stand as a shining signal to the nations of the world. 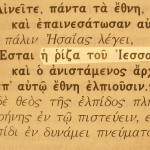 Root of Jesse in the Greek text of Romans 15:12

Root of Jesse in Greek:

There shall come the root of Jesse
And He who arises to rule over the Gentiles
In Him shall the Gentiles hope. (Romans 15:12 is a loose quotation of Isaiah 11:10)