The shevet was a threshing implement used to beat seeds out of the ears of cereal crops. The word was also used to indicate a weapon or an instrument of discipline, hence it was a symbol of rulership, and so translators sometimes use the word scepter. The word also stands for the rod of Psalm 23 and the staff of office in Judges 5:14.

When Balaam, the hired prophet of Moab, spoke over the nation of Israel, one of his prophecies included a Star and a Scepter arising from the nation. The passage was often interpreted as a messianic prophecy that points to Jesus (Yeshua‘).

The scepter is mentioned in another messianic passage as an instrument of the ruling messiah who is called by the mysterious word Shiloh (Genesis 49:10). 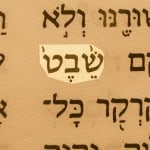 I see him, but not now;
I behold him, but not near.
A star will come out of Jacob;
a scepter will rise out of Israel.
He will crush the foreheads of Moab,
the skulls of all the people of Sheth. (Num. 24:17)