Perhaps this is the promise that spans the Bible farthest–from Genesis to Revelation. We can trace the promised seed of God all the way back to Genesis where God spoke to the serpent. He promised a descendant from Eve who would bruise the serpent’s head. The promise was passed down through the generations and mentioned in connection with Abraham and King David. Jesus (Yeshua‘) came in fulfillment of the prophecy and Paul noted that fact. In that sense, this is a name of Jesus Christ. 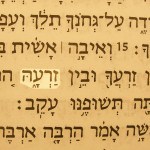 Her Seed in Hebrew:

I will put enmity
Between you and the woman,
And between your seed and her seed;
He shall bruise you on the head,
And you shall bruise him on the heel. (Genesis 3:15) 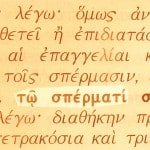 Your Seed in Greek:

The promises were spoken to Abraham and to his seed. Scripture does not say “and to seeds,” meaning many people, but “and to your seed,” meaning one person, who is Christ. (Galatians 3:16 NIV)

Similar names of Jesus are the root and descendant of David, root of David and root of Jesse (David’s father).