“Son of David” referred to descent from David, but it stressed more. Anyone who was “son of” someone displayed the characteristics of that person. David had been God’s anointed king over a glorious nation; the Messiah was expected to lead Israel back to her glory days. Jesus did something far better than freeing Israel from Roman occupation; He announced the kingdom of God and made it accessible to every nation through faith in Him. Jesus brought freedom from the worst oppressor—Satan. 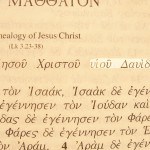 “Jesus Christ Son of David” in the Greek text of Matthew 1:1.

Son of David in Greek:

Now while the Pharisees were gathered together, Jesus asked them a question: “What do you think about the Christ, whose son is He?” They said to Him, “The son of David [the simpler Greek phrase tou Dauid is used in this case].” He said to them, “Then how does David in the Spirit call Him ‘Lord,’ saying,

‘The Lord said to my Lord,
“Sit at My right hand,
Until I put Your enemies beneath Your feet”’?