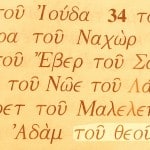 Son of God in Greek:

Luke’s genealogy of Jesus ends with the following words: 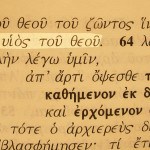 The beginning of the gospel of Jesus Christ, the Son of God. (Mark 1:1 KJV)

Similar names of Jesus that point to His relationship with the Father are Son of the Most High, Son of the Living God, and simply, Son. Jesus was also called the Son of Mary and Son of Joseph. Two other messianic titles are Son of David and Son of Man.