Son of Joseph is one of the names of Jesus (Yeshua‘) that was used to distinguish Him from other men who shared the common name “Jesus.” It is likely that Joseph died while Jesus was relatively young and for that reason we do not see this name used often. 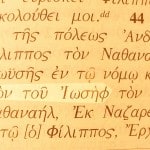 Son of Joseph in Greek:

Philip found Nathanael and told him, “We have found the one Moses wrote about in the Law, and about whom the prophets also wrote—Jesus of Nazareth, the son of Joseph.” (John 1:45)

Similar distinguishing names of Jesus are the Carpenter’s son and Son of Mary.