The phrase, “Son of Man” is only used as a prophetic name of Jesus (Yeshua‘) in one Aramaic verse of the Old Testament. It is a common title in Hebrew but never used to refer to Jesus. However, in the New Testament, the title is used for Jesus in many different ways. Sometimes Jesus used it to speak of Himself as though he was replacing the personal pronoun “I.” He talked about the Son of Man in the present and often in His future roles. Many times Jesus spoke of the Son of Man having to suffer and die before being resurrected. Jesus seems to have taken a familiar title and used it in a new way to shock people into listening.

Because the title occurs in the prophecy of Daniel 7 where the Son of Man receives a kingdom from the Ancient of Days, the title was understood as messianic from early on. 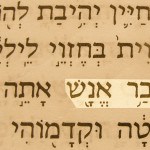 Son of Man in Aramaic:

I kept looking in the night visions,
And behold, with the clouds of heaven
One like a Son of Man was coming,
And He came up to the Ancient of Days
And was presented before Him. (Daniel 7:13)

This verse was translated into the Greek Old Testament as ho hyios anthrōpou, which is similar to the New Testament Greek phrase. 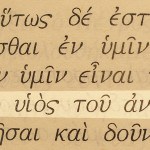 Son of Man in Greek:

The Son of Man came eating and drinking, and they say, “Behold, a gluttonous man and a drunkard, a friend of tax collectors and sinners!” Yet wisdom is vindicated by her deeds. (Matthew 11:19)

Jesus used the title about 80 times in the Gospels. Other New Testament writers only used it when quoting or alluding to Old Testament verses because Jesus was recognized as Christ and Lord by then.

There are similar names of Jesus that tell of His human relationships: Son of Mary and Son of Joseph. Other names point to His relationship with the Father: Son of the Most High, Son of the Living God, and simply, Son. Two other messianic titles are Son of David and Son of God.