Son of Mary is an unusual distinguishing name of Jesus because it refers to His mother. “Jesus” (Yeshua‘) was a fairly common name in His time. The Jews used other names to distinguish between men called Jesus. To call Jesus the Son of Mary suggests that Joseph had died by then so that perhaps people no longer called Jesus the Son of Joseph. But it may also be a reflection of His virgin birth. 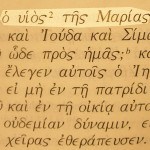 Son of Mary in Greek:

Is not this the carpenter, the son of Mary, the brother of James, and Joses, and of Juda, and Simon? and are not his sisters here with us? And they were offended at him. (Mark 6:3 KJV)