Sovereign is a title or name of God found once in Paul’s first letter to Timothy. The Greek word dynastēs is literally “a possessor of power.” It was used for a court official or ruler. The breadth of possible meaning in the word dynastēs is reflected in the variety among the common English versions (Ruler in NIV, Potentate in KJV, Undisputed Ruler in MSG). 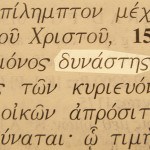 In his letter to Timothy, Paul refers to God as

He who is the blessed and only Sovereign, the King of kings and Lord of lords, who alone possesses immortality and dwells in unapproachable light, whom no man has seen or can see. To Him be honor and eternal dominion! Amen. (1 Timothy 6:15)

In the NIV, the Greek word despotēs is translated with the name Sovereign Lord in some places where other versions have simply “Lord.” Also, some Hebrew doublets like, Adonai Yahweh (Jehovah), are written Sovereign LORD in the NIV (Lord GOD in NASB).